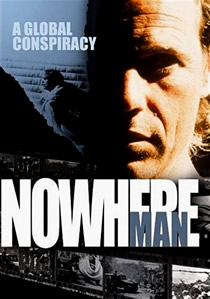 Nowhere Man was a suspense series starring Bruce Greenwood as a man who finds his entire life erased. It aired on UPN from 1995-1996.

Thomas Veil (Bruce Greenwood) is an up and coming photojournalist on the verge of success with the help of his best friend and supportive spouse. After an exhibition of his work, Tom takes his wife out for a romantic dinner. He gets up to go to the men’s room-but when he returns his wife is not there. Tom sees another couple sitting at their table. He asks the host about his wife, but the host has no recollection of either of them. At first he thinks it a practical joke then get increasingly hostile and is ushered from the restaurant. When Tom Veil returns home, he finds his wife there-married to someone else, and having no idea who he is. Tom follows her by hiding in her car. She confesses that she does know him but must play along because ‘they’ are watching.

Thomas Veil’s life has been erased. His friends don’t know him and his identity seems to be erased from all record. He figures out that the people responsible for his erasure negatives of a photograph he took of rebels being hanged by  US soldiers in South America. Someone wants the negatives to erase all the evidence. Veil believes it’s part of a coverup of government activities.  He tries to identify the military unit involved using evidence from the photos, yet, each step takes him  deeper into a an ever, menacing conspiracy.  He follows a trail of clues with lead him to several other anomalies: one town controlled by  subliminal programming; another town in which people are being abducted by UFO’s;  yet another  town comprised entirely of people who’ve been erased like Tom.  Veil himself is often captured, tracked, and subject to further experiments.

It’s definitely a conspiracy theory show-not really SF but deals with many of the themes common in dark conspiracy TV. Brainwashing, subliminal messaging, government surveillance, government cover-ups. It’s a really good show with lots of action and plenty to think about. Bruce Greenwood is great and most of the guest cast and supporting actors do a good job. The strength of the show is that it gives away just enough information each episode to keep you interested, but always adds on new avenues for Thomas Veil to pursue. It’s engaging.

It was cancelled after one season. There is a conclusion of sorts, but I couldn’t help feeling like there was so much more to explore. Anyway, worth the watch.